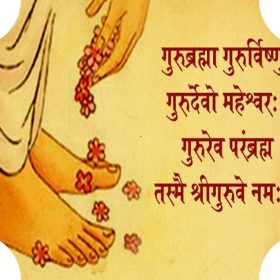 We observe the Ashadha Suddha Poornima (the full moon day in the month of Ashdha) as Guru Poornima/Guru Purnima. On this day the disciples,thank their Gurus,perform Guru Pooja and seek blessings from the Guru. Guru Purnima happens to be the Birthday of Shri VedaVyasa a very important person in our Guru Parampara.

Veda Vyasa was the incarnation of Lord Vishnu himself .

Veda Vyasa’s contribution to Sanatan Dharma is immense , he did the veda vibhag i.e. he classified the Vedam as Rig Veda ,Yajur Veda ,Sama Veda and Atharvana Veda. Then he gave 18 Puranas and then he gave us Maha Bharatam /Maha Bharat .Then he gave us Brahma Sutras,Sri mad Bhagavatam ,Devi Bhagavatam & More, the list is long.It’s not possible tell about Bhagwan VedaVyasa in one post.

Puja which can be performed on Guru Purnima:

Book A Pandit for Guru Purnima

Krishna himself stood as a Guru to Arjuna and gave Bhagawad Gita to this world .

Hence there is a saying “Krishnam vande Jagadgurum”.

Guru who leads from Darkness to light:

The ancient tradition of reverence for the guru in Hindu scriptures is apparent in 6.23 of the Shvetashvatara Upanishad, which equates the need of reverence and devotion for guru to be the same as for god,

He who has highest Bhakti (love, devotion)[38] of Deva (god),
just like his Deva, so for his Guru,
To him who is high-minded,
these teachings will be illuminating.
— Shvetashvatara Upanishad 6.23

Even parent is a Guru as they are the best Teacher /Guru to a child. Guru is the one who acts as the link between the God and the human soul. And having a Guru in your life is a must. Guru is the one who teaches about life, spirituality, gives knowledge, and finally, guides a person to reach God. On this day, one should pray Parents, Teachers and seek their blessings.

In Sikhism, Guru is the source of all knowledge which is Almighty. In Chopai Sahib, Guru Gobind Singh states about who is the Guru:

sakalapuja.com has a team of learned, qualified and experienced Astrologers, Pandits/Purohits/Pujaris,
we take care of the entire process, from booking and assigning the qualified Purohit, choosing auspicious Muhuratha, selection and procuring of required Puja Samagri. All you need to do is to book the Puja, sit back and relax while we work on ensuring that you will have divine and satisfying Puja experience.

Book A Pandit for Guru Purnima