Metal in Vedas or Ancient times

Metal in Vedas or Ancient times and Some Benefits:

Bharatha was the leader in Metallurgy for more than 5,000 years. Gold jewelery is available from 3,000 BCE. Brass and bronze pieces are dated back to 1,300 BCE. Extraction of zinc from ore by distillation was used in India as early as 400 BCE while European William Campion patented the process some 2,000 years later. Copper statues can be dated back to 500 CE. There is an iron pillar in Delhi dating back to 400 CE that shows no sign of rust or decay.

The Rasaratnakara, a text ascribed to the great Indian scientist Nagarjuna, of the early Christian era describes this method of production of zinc. The book Rasaratnanakara addresses various metallurgical topics such as:

Preparation of liquids (rasas) such as Mercury
Extraction of metals like Gold, Silver, Tin, and Copper from their ores and their purification
The processes of liquefaction, distillation, sublimation, and roasting

Rasa Rasaratnasamuccaya, a 13th century text gives details of the distillation process by tiryakpatanayantra (distillation by descending). This ingenious method was devised of downward distillation of the zinc vapour formed after smelting zinc ore using specifically designed retorts with condensers and furnaces, so that the smelted zinc vapour could be drastically cooled down to get a melt that could solidify to zinc metal.

India was invaded by Mohammedans during the time of Nagarjuna. It is possible that Nagarjuna’s texts fell into the hands of the invaders, who could have transmitted these Indian Metallurgical sciences to the outside world.
Vedic people had used Copper extensively in agriculture, Water purification, tools, utensils etc.,

Below we list some of the uses of each metals, which are still valid and can be used for our benefits.

Hiranya in the Rig Veda and later denotes Gold. Perhaps they got it from the bed of rivers. Certain rivers are called Gold (Sone= swarna). Indus is also described as a golden stream. Extraction of gold and washing of gold are recorded in the Vedic literature!

Early reference to gold is to be found in the Rig Veda Samhita. In all the sacrificial rites golden vessels were said to have been used.

The Arthasastra refers to gold having “the colour of lotus, soft, lustrous and not producing any type of sound”
Gold was used for ornaments for neck and breast (Niska), for ear rings (Karna Sobhana) and even for Cups. Gold is always associated with the gods.

Gold destroys harmful germs in the body. – Brahmangranth
Gold is the most sattvik (Sattva-predominant) amongst all the metals.
Gold is a metal that imbibes sattvik and Chaitanya enriched waves and emits them into the atmosphere with equal speed. Gold also leads in preserving Chaitanya enriched waves in the form of Tej-tattva (Absolute Fire Principle). Hence, an individual who wears gold ornaments receives the benefit of sattvikta and Chaitanya.

Mostly, ornaments are made of gold. It is a metal predominant in Tej, meaning, it is a donor of Tej-tattva, and hence, the Tej waves transmitted from it activate the Suryanadi (The sun channel) in the body of the woman. Based on that, the Shakti-tattva (Energy Principle) in a woman gets activated and protects the entire family.

Even if attacked by more powerful negative energies because of wearing gold ornaments, the ensuing spiritual practice ensures protection. Whatever be the level of Chaitanya the gold ornaments are endowed with, there also exist negative energies in the atmosphere that resist this Chaitanya. As an effect of the subtle battle between negative energies and gold, an average individual can get distressed to the extent of 10 percent; but if the individual is performing spiritual practice, it develops the ability to sustain the effects of the subtle battle. Depending on its bhav (Spiritual emotion), the individual can use the ornaments like a weapon, and can increase the self-protection capacity up to 30 percent.

Other metal objects made by Indian artisans include lamps.[34] Copper was also a component in the razors for the tonsure ceremony.[15] One of the most important sources of history in the Indian subcontinent are the royal records of grants engraved on copper-plate grants (tamra-shasan or tamra-patra). Because copper does not rust or decay, they can survive indefinitely. Collections of archaeological texts from the copper-plates and rock-inscriptions have been compiled and published by the Archaeological Survey of India during the past century. The earliest known copper-plate known as the Sohgaura copper-plate is a Maurya record that mentions famine relief efforts. It is one of the very few pre-Ashoka Brahmi inscriptions in India.
Vedic people had used Copper extensively in agriculture, Water purification, tools, utensils etc.,

Silver is even attributed in the ancient chakra system – a system of seven sacred energy centers of the body. Silver is associated with the sixth chakra, often referred to as the “third-eye”. In this sense, silver certainly represents the concept of reflection, both physically ( all reflective substances are silvery ) and as an internal exercise of self-analysis.

the ancient Vedas expound on the intrinsic power of silver. Within the Ayurvedic system of thought, all illness is rooted in an imbalance in the human energy system, and pure metals in precise combinations are used to help restore the body’s electromagnetic balance to a state of equilibrium. Medically, silver was known to be a liver and spleen detoxifier. 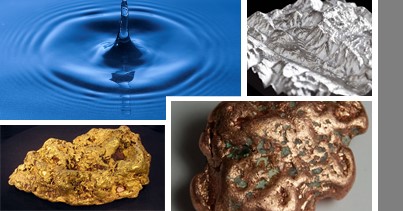 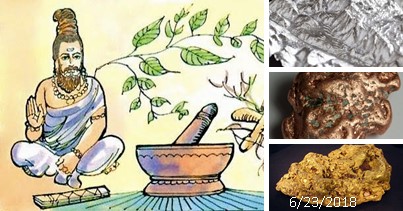 Lord of the dwelling, he subdued the demon who roared aloud, six-eyed and triple-headed. Trta, made stronger by the might he lent him, struck down the boar with shaft whose point was iron.

Prepare the cow-stall, for there drink your heroes: stitch ye the coats of armour, wide and many. Make iron forts, secure from all assailants let not your pitcher leak: stay it securely.

One brandishes in his hand an iron knife, firm, in his seat amid the Deities

Adorned with gold, its columns are of iron. in heaven it glitters like a whip for horses; Or stablished on a field deep−spoiled and fruitful. So may we share the meath that loads your car−seat.

Thou hurledst forth from heaven the iron missile, brought by the Skilful, from the sling of leather, When thou, O Much-invoked, assisting Kutsa with endless deadly darts didst compass Susna.

Strong, with fair chains of gold and jaws of iron, ye have a splendid car and wellfed horses. Ye Sons of Strength, ye progeny of Indra, to you the best is offered to delight you.

This Savitar the God, the golden−handed, Friend of the home, hath risen to meet the twilight. With cheeks of brass, with pleasant tongue, the Holy, he sends the worshipper rich gifts in plenty.

Swords of good brass are in our house: we know how many joints thou hast, O spell! Be sure to rise, go away from hence! O stranger, what seekest thou here?

l Protect me in front, protect me at the side, protect me from behind; from the quarters protect me; from all deadly things protect me.
m Gold hued in the glowing of the dawns, Bronze pillared at the rising of the sun, O Varuna, O Mitra, mount your chariot seat, And thence behold ye Aditi and Diti.

There are so many other refrences too.

“Neither silver, nor gold nor even diamonds nor the sovereignty of the three worlds, can be worthy of this message.”

Kumbhakarna, the annihilator of enemies, speedily took up a sharp spike fully made of iron, adorned with pure gold and splendidly shining.

The Mahabharata, Book 1: Adi Parva: Khandava-daha Parva: Section CCXXVII
And Pavaka then gave unto Krishna a discus with an iron pole attached to a hole in the centre. And it was a fiery weapon and became his favourite. Having obtained that weapon, Krishna also became equal to the task.

Maces were mainly made by iron.

The Mahabharata, Book 3: Vana Parva: Indralokagamana Parva: Section LI
And amongst them will move that great warrior Bhima of terrible prowess, armed with his iron mace held on high and capable of slaying every hero. And high above the din will be heard the twang of the Gandiva loud as the thunder of heaven.

Arrows were mainly made by iron. But sometimes also made of steel, silver and copper.

The Mahabharata, Book 3: Vana Parva: Tirtha-yatra Parva: Section CLXXII
And battered and broken by the straight-coursing iron shafts, shot by me, the city of the Asuras, O king, fell to the earth. And they also, wounded by my iron arrows having the speed of the thunder, began, O monarch, to go about, being urged by destiny.

The Mahabharata, Book 4: Virata Parva: Go-harana Parva: Section LXII
And loud was the clatter made by Arjuna’s shafts as they cleft the coats of mail belonging to mighty warriors, made of steel, silver, and copper. And the field was soon covered with the corpses of warriors mounted on elephants and horses, all mangled by the shafts of Partha of great impetuosity like unto sighing snakes.

Wheels of chariots were made up of iron:

The Mahabharata, Book 1: Adi Parva: Viduragamana Parva: Section CCIX
There were also large iron wheels planted on them. And with all these was that foremost of cities adorned. The streets were all wide and laid out excellently; and there was no fear in them of accident. And decked with innumerable mansions, the city became like unto Amaravati and came to be called Indraprastha (like unto Indra’s city).

Smritis mention frequent use of metals. Some of examples are:

SB 3.17.26. Moving about in the ocean for many, many years, the mighty Hiranyaksa smote the gigantic wind-tossed waves again and again with his iron mace and reached Vibhavari, the capital of Varuna.

SB10.41.20The Lord saw Mathura, with its tall gates and household entrances made of crystal, its immense archways and main doors of gold, its granaries and other storehouses of copper and brass, and its impregnable moats. Beautifying the city were pleasant gardens and parks. The main intersections were fashioned of gold, and there were mansions with private pleasure gardens, along with guildhalls and many other buildings.

Above are only a few refrences. There are much more use and mention of metals in Purans